Iceland where is famous for Active spa, has been using geothermal energy to supply energy requirement for a long time. Iceland found new way to get more energy from volcanic area. Iceland has started a new project to get energy from volcanoes with deep hot holes that reach molten magma. With this project, experts will drill 5 kilometers deep in Southwest of Iceland. It is predicted to be 400-1000 Celcius and this tempreture will be enough to get supercritical steam for producing 50 megawatt energy. This method will be more efficient than traditional geothermal well. Project aims penetrating all the rock layers and reaching the magmies that leak into the volcanoes.That is the task of a rig now drilling 5 kilometres into the rugged landscape of old lava flows in Reykjanes, at the south-west corner of Iceland. Drilling began on 12 August.By the end of the year, the Iceland Deep Drilling Project (IDDP) hopes to have created the hottest hole in the world, hitting temperatures anywhere between 400 and 1000 °C.The drilling will penetrate a landward extension of the Mid-Atlantic Ridge – a major boundary between Earth’s tectonic plates – says Albert Albertsson, assistant director of HS Orka, an Icelandic geothermal-energy company involved in the project. At that depth, magma that moves from below through volcanic activity meets and heats seawater that has penetrated beneath the ocean bed.

“People have drilled into hard rock at this depth, but never before into a fluid system like this,” says Albertsson.  He says the team could find the landward equivalent of “black smokers”, hot underwater springs along the ridge saturated with minerals such as gold, silver and lithium.

At that depth, pressures are high, too – at more than 200 times atmospheric levels.  The consortium of energy companies and researchers behind the project expects the water to be in the form of “supercritical steam”, which is neither liquid nor gas and holds much more heat energy than either.

A well that can successfully tap into such steam could have an energy capacity of 50 megawatts, compared to the 5 MW of a typical geothermal well, says Albertsson. This would mean some 50,000 homes could be powered, versus 5,000 from a single well.It will be the IDDP’s second deep well. The first, in the Krafla geothermal field of north-east Iceland, unexpectedly struck magma at just over 2 km down in 2009.The hot magma was briefly used to heat cold water sent down the well to test how much energy could be generated and that the technology worked. It never supplied power to the Icelandic grid, but until it was shut down after corrosion problems, it was the most powerful geothermal well ever drilled, generating 30 MW.The plan is to go one better this time, creating a long-term energy source.Iceland’s electricity is already entirely powered by non-fossil-fuel sources. But its string of geothermal power plants plays second fiddle to its large hydroelectric power stations, which generate three-quarters of the country’s electricity. That could change.

“If they can get supercritical steam in deep boreholes, that will make an order of magnitude difference to the amount of geothermal energy the wells can produce,”says Arnar Guðmundsson of Invest in Iceland, a government agency that promotes energy development.There could be global benefits, too, if the techniques being developed in Iceland are adopted elsewhere.“Potential sites for supercritical geothermal resources occur worldwide, where young volcanoes occur,”says Wilfred Elders, a geologist at the University of California, Riverside, who is a long-term collaborator on the project. 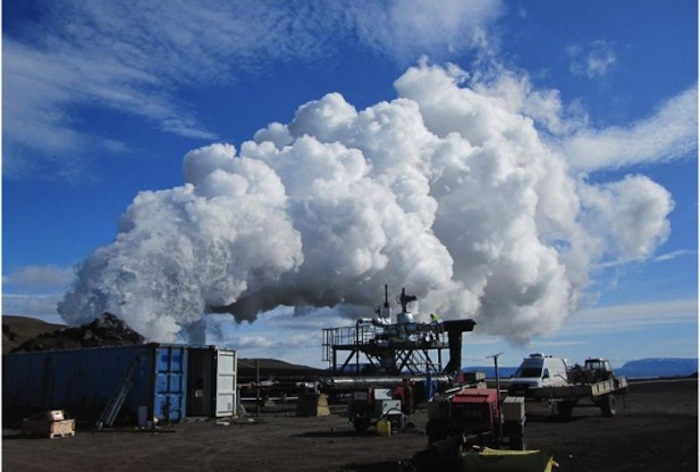